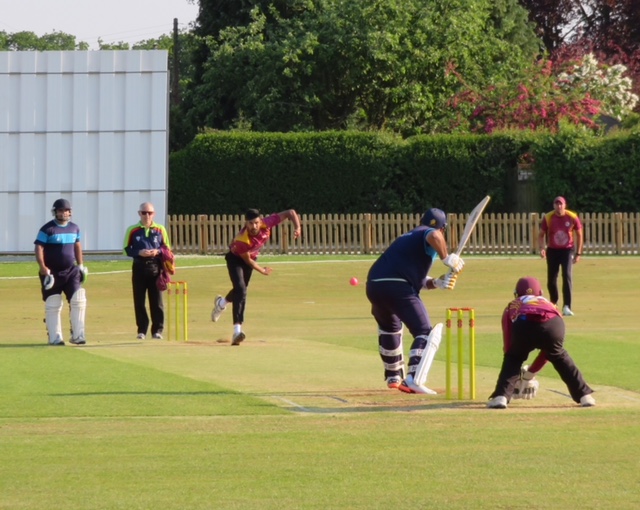 Last night the 1st X1 took on Walsall for a place in finals day of the T20 Challenge Cup. After victories over Penkridge and Bridgnorth in previous rounds we were confident of causing an upset. Vikai Dass was called in to replace Pirm who has pulled his side playing and missing at one, and Ryan continued in place of Sanjay.

We won the toss and elected to bowl on a wicket that looked like it might take turn and seam. Sandhu opened up and bowled dots at Shoaib before he streakily hit one over the top. Guesty opened the other end and managed a wicket for a change ending his drought. Lewis replaced Sandhu and was a constant threat. He picked up 4-16 and even more impressively didn’t get hit for 6. Kash was miserly as always, Adam found much better lengths and Powlesy bowled well at his old stomping ground. The outfield was bobbly and the sun a problem wherever Sandhu was fielding aside from that we did well to restrict them to 107. Vikai marking his debut with a good catch at point.

Niall and Sandhu opened up and got us off to a flyer before Niall hit a full toss straight in the air. He got his customary send off, its deserved because of al the stick he dishes out every single game….Sandhu blasted an 18 ball 36 and the back of the chase was broken. Macca and Powlesy looked to be seeing it home before Powlesy was caught. Jem went in and actually hit a straight delivery, that, coupled with 2 more boundaries saw us home with Ryan still waiting to have a hit! Macca chewed, Sandhu dropped, Niall got a send off so a standard night at the office made sweeter with the taste of victory.

Sanjay then witnessed his first Nando’s, a cultural experience for him. A brilliant team effort and onto finals day we go on the 8th July at Kenilworth Wardens CC.